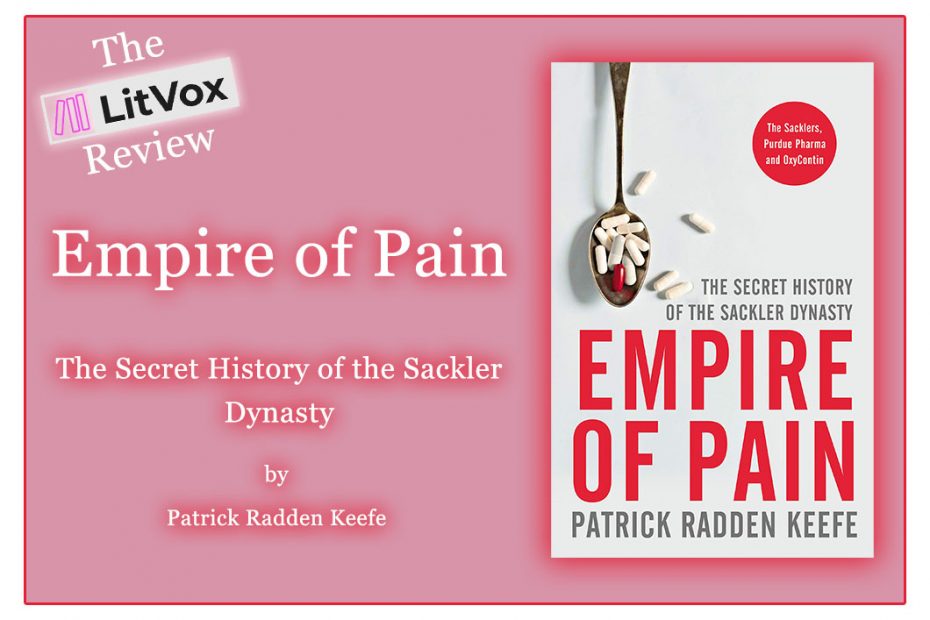 Keefe’s journalism always has the ring of an epic thriller, and this title is no exception. Shocking, full of evil and sympathy, and it unfolds at an exhilarating pace.

There is a growing tendency among Europeans, rightly or wrongly, to view the state of American healthcare as a simulacrum for the country’s wider problems. Money is king, people are secondary, corporate interests grow fatter and nastier off the back of indifference and greed. The inability of working Americans to obtain even the most basic healthcare rights has long been an indicator of just how broken the American system is for lower-income families. What is less well understood (until now) is the nature and origins of the people who reap billions of dollars off the backs of the opioid crisis.

This crisis has now claimed the lives of more than half a million Americans through overdoses, and left millions addicted to opioid drugs. At the heart of this crisis is one drug and one family: Oxycontin and the Sackler dynasty. The drug itself has been misleadingly prescribed to millions of patients for pain relief, with doctors deliberately playing down the highly addictive nature of the drug. The Sacklers themselves have been portrayed as modern day Medici’s, a family dedicated to supporting worthy causes in the arts and charities. The Sackler name adorns plaques and doorways in Harvard, The Lourve and Oxford University. Philanthropy is their watchword. And yet, the source of the Sackler’s wealth had remained largely shrouded in obscurity, until it emerged that their main source of income came from the aggressive marketing of Oxycontin.

Keefe’s wonderful book details the cynical and shady story of how the Sackler family duped the FDA, bribed and cajoled doctors into prescribing this powerful drug for even mild pain problems, and have systematically ignored the devastation caused throughout America by their greed. Oxycontin is (deliberately) expensive, and its addictiveness has been shockingly marketed to medical practitioners as a selling point. The Oxycontin slogan became “The painkiller to start with and stay with”. Those unwitting patients who could afford to keep taking oxycontin now find themselves hopelessly addicted to it. Tens of thousands more who can’t afford it have progressed to other opioids drugs, mainly heroin. All the while, the Sackler famiy continue to ignore the overwhelming evidence of the drug’s addictiveness, and aggressively tackle any individual or group who attempts to shine a light on their role in the epidemic of addiction.

Anyone who has read Keefe before, particularly his wonderful account of the Northern Irish Troubles, Say Nothing, will be fully aware of just how good of an investigative journalist he is. Keefe’s style is that of a thriller writer, his investigative skills are second to none and there is not one superfluous word in this account. The most shocking parts of this book are not in his detailing the greed and indifference of the Sackler family, but rather the cynicism and opportunism of doctors and hospital boards in prescribing a drug to mostly poor people, knowing full well that they will become addicted. Keefe was repeatedly threatened with legal action by the Sacklers while researching Empire of Pain, and the damning indictment that is the finished work shows exactly why. This is a family who have wrought untold destruction on the fabric of American society.

This book is a wonderful exposé of a family dynasty built on the back of a nation’s misery, but more importantly, it is a fantastic analysis of just how deeply money and indifference to suffering has ruined the American experiment for millions of people.

You can buy your copy of Empire of Pain from the LitVox Bookshop here.